Heading into the penultimate round of the IMSA Michelin Pilot Challenge, at the tight twisty track of Weathertech Raceway Laguna Seca, the Unitronic supported team knew they would have their work cut out, as the track would predominantly favor the sequential transmission cars better than the Audi RS 3 LMS TCR DSG. The added weight on the front end and the differential differences of the DSG gearbox on the front end, result in the SEQ equipped cars to have the slight advantage.

Nevertheless, the Unitronic No.17 Audi RS 3 LMS started off the weekend strong, closing out free practice two in 3rd place within reach of the faster cars of the sessions. Qualifying got underway with South African ace Julian Van der Watt behind the wheel in only his second-ever IMSA race and first-ever qualifying. He was able to put the No.17 Audi at the sharp end of the field in 6th position against the highly competitive group of TCR cars.

The two-hour race got underway in the beautiful California weather conditions and ran safety car free until the 40-minute mark. Van der Watt impressed everyone, as he worked his way methodically through the field into 3rd place. With minimum drive time requirements being fulfilled, the team opted to take the opportunity to pit under full course yellow for a full service and driver change, knowing cations were unpredictable. 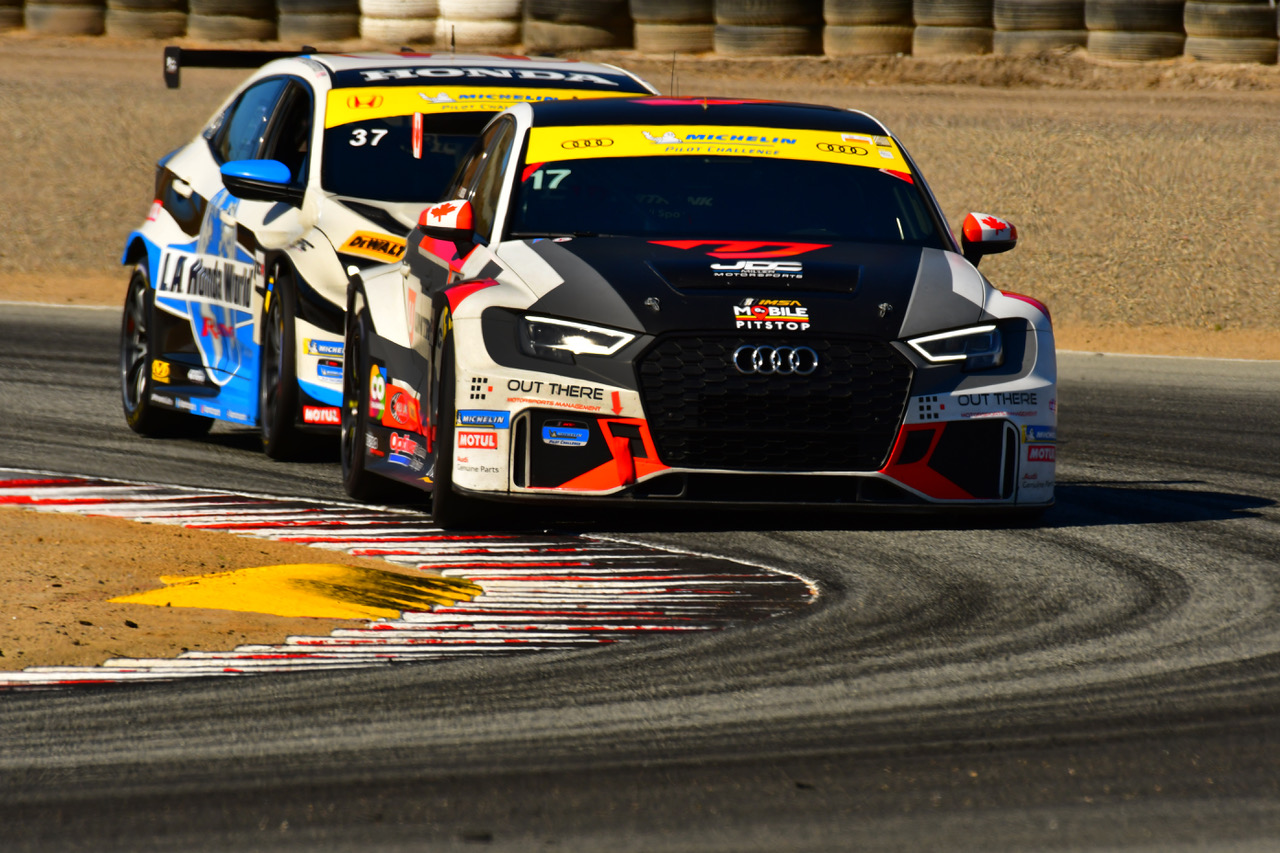 Unfortunately, a miscommunication between the drivers resulted in the wheels of the car spinning in the air, not allowing the crew to change the tires for several seconds and also forcing the team to have to serve a drive-through penalty when the race resumed dropping the No.17 entry to 11th position at the back of a stacked field. “I managed to fight my way through to 3rd place and was busy catching the leading two cars when the team made the call to bring me in under a full caution. Unfortunately, during the pitstop, the car went into drive which caused the wheels to spin while the car was on its jacks, and we got a penalty for that. Gabby jumped in and made an impressive comeback from P11 to P6. A huge thanks to the entire Unitronic and JDC-Miller Motorsports team and crew for all the hard work to get the #17 Audi dialed in for the race,” said Julian Van der Watt.

Now behind the wheel, Colombian born Chaves had to go to work. As they say in motorsport, cautions bring more cautions and after the restart, the race quickly returned back behind the safety car after a mutli-car crash. With now only one-hour left, Chaves started making his moves and skillfully worked his way up to take the checkered flag in 6th position. "The race started just right with Julian putting in a great drive to get us into podium contention. Unfortunately, during the pit stop, we had an issue that not only cost us a lot of track time but also a drive-thru penalty. I did all I could to get us back to the front and had a really strong car at the end of the stint but simply ran out of time to get past any more cars. It was a great experience and I look forward to any future opportunities to keep expanding my racing knowledge and experience in all types of cars!" says Chaves. 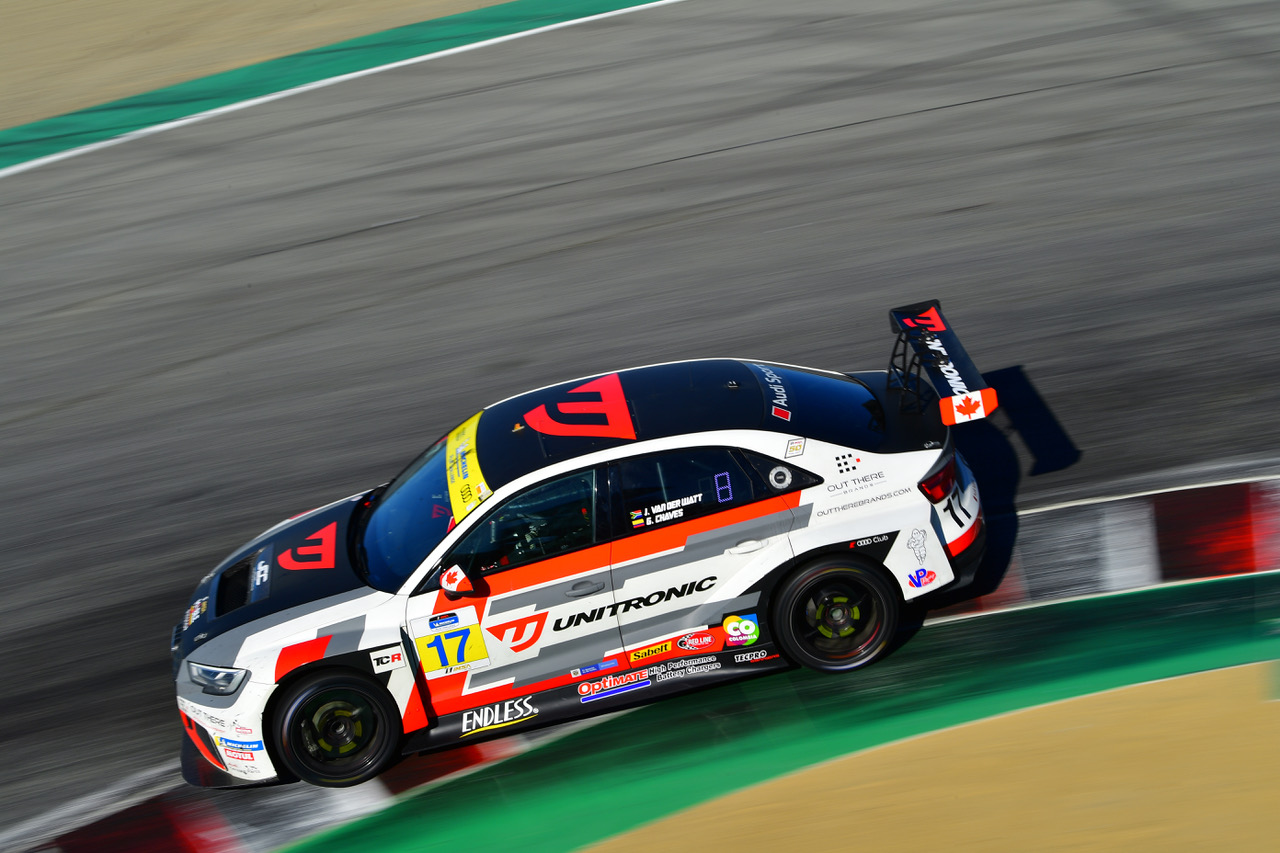 The Unitronic Audi RS 3 LMS heads to Michelin Raceway Road Atlanta next for the final round of the 2019 IMSA Michelin Pilot Challenge championship on October 10th – 11th. Come out and support the team and drivers, Mikey Taylor and Britt Casey Jr. as they look to end the year on a high!

About Out There Brands
OUT THERE BRANDS was founded by professional racing driver Michael Taylor, filling the void focusing on offering extremely personalized branding services to the motorsports industry, specializing in custom made paddock displays and motorsports apparel. Alongside these services, Out There Brands provides first-class hospitality and event management. Learn more about getting your brand out there at www.outtherebrands.com