After what seemed like an endless run of bad luck and freak mechanical issues during the middle of the season, the Unitronic JDC-Miller MotorSports team has put in the work and the results show the team’s progress with three consecutive top five finishes and qualifying within the top two, in the last two events. 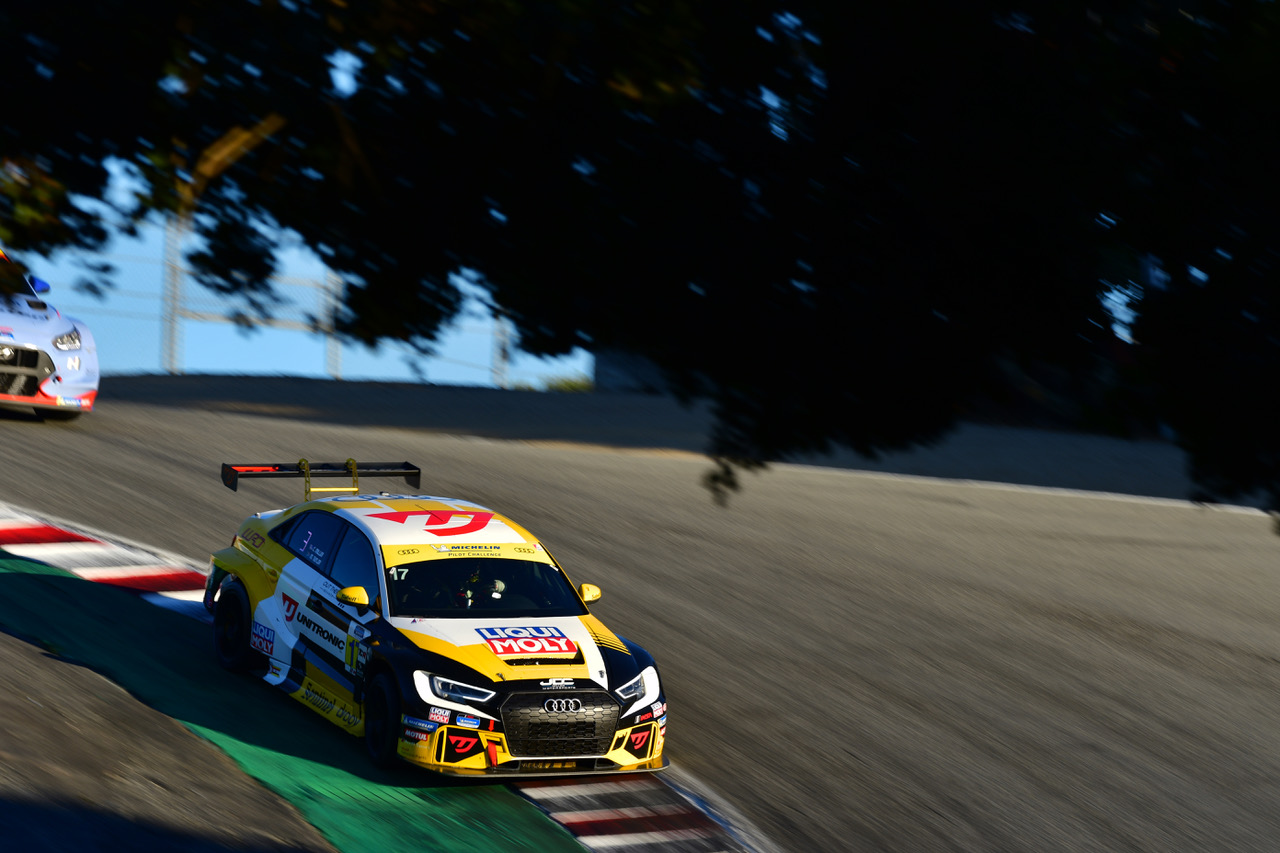 Wasting no time to get going, the driver pairing of Chris Miller and Mikey Taylor started off the weekend as strong as possible, setting the fastest time in free practice 1 and finished the second free practice in P3. However, the team knew one of the keys to success in the race was going to come down to setting up its #17 Audi RS 3 LMS TCR SEQ to perform on older tires, as Laguna Seca is a very abrasive race track and tire degradation is the worst the team will see all year. 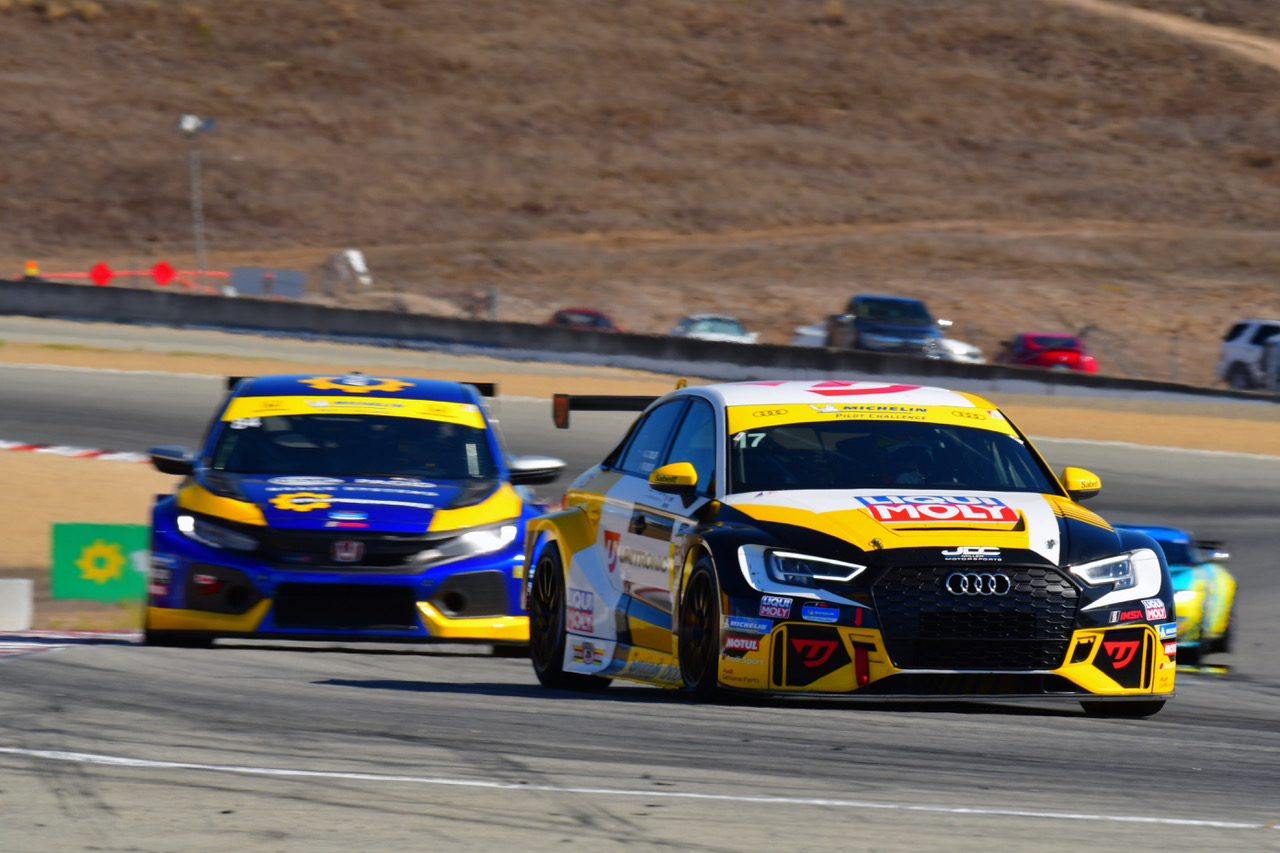 Chris Miller headed out for a tough qualifying session against some fast competition in the Hyundai’s and Honda’s and after laying down a few flying laps, he only managed a best for 3rd place. The Daytona 24 hour race winner radioed to the team telling them he had enough for one more flying lap, and with a fantastic effort, secured pole position by 0.017 of a second over an extremely tight TCR field, with the top five separated by less than 0.3 of a second. The joy was short-lived unfortunately, as the #17 was sent to the back of the field in post-qualifying tech inspection, after it was found to be exceeding maximum negative front camber imposed by IMSA and Michelin, due to a faulty right front wheel camber measuring device.Miller, filled with mixed emotions after qualifying said “The team gave me a fast car like they have all year and it was a blast to drive all weekend. Unfortunately we made a small mistake that cost us the pole but I can’t wait to get to the next race to try to go for another one!”

Starting at the back of the field on a track that is typically difficult to overtake and very tough on tires, was always going to be a battle. Taking it in stride, the #17 Unitronic JDC-Miller Motorsports crew kept positive and from the drop of the green flag, started making up positions climbing as high as 3rd place, but unfortunately due to some contact on track and other damage sustained while fighting their way through the field, the team lost one second of performance per lap in their pole sitting car and were forced to hang onto 4th position. “We definitely feel like we should have been further up the order, but we also still have to look at the positives of the weekend! We had one of, if not the fastest car on a track, on a circuit that doesn’t really suit our manufacturer, Chris did an amazing job, and we had a lot of fun with all our guests and family at the race track this weekend!” said Taylor.

Next race for the team will be Virginia International Raceway, only hours from the North American headquarters for Audi and the team will be looking to get a strong finish for the brand! Track action begins Friday, October 08, 2021 at 2:15 PM, tune into IMSA.com for timing and scoring results, and follow along via on the UNITRONIC social media channels for behind the scenes action. You can also stay up to date on our activities, learn more about the team, our pro drivers, the #17 RS 3 LMS TCR race car, our tremendous sponsors and shop for team merch on www.getunitronic.com/motorsports! 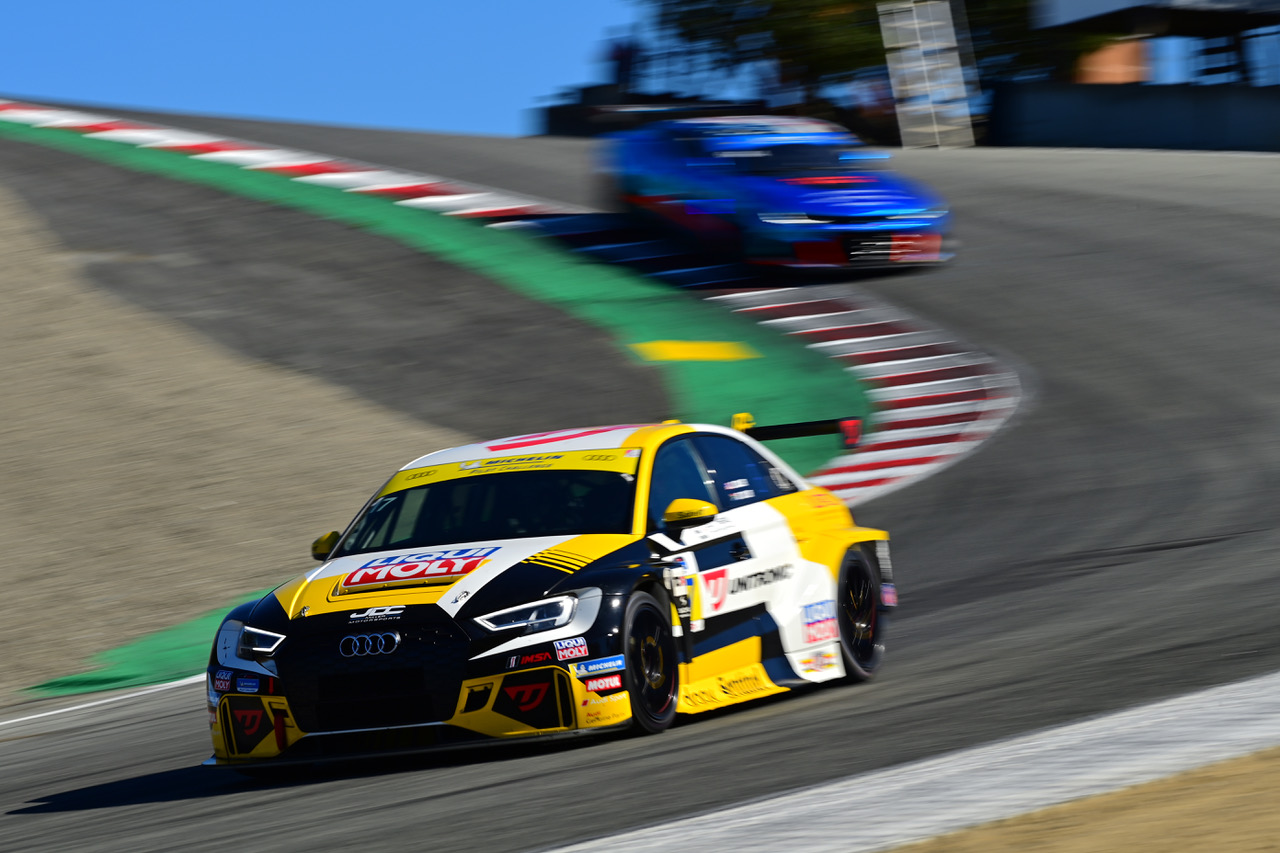 About DRAGY INTERNATIONAL LIMITED
The Dragy Performance Box uses high speed GPS satellites to accurately measure your vehicle’s performance within 1/100th of a second. The included Dragy software is available for iOS and Android users and automatically charts slope on all timeslips which you can then post to forums or social media, share with friends, or even upload to the Dragy leaderboard. Runs are saved in both metric and SAE formats, allowing comparisons of 100-200kmh and all metric equivalents for users all around the world. Learn more at www.godragy.com

About WRD (Watercooled Racing Development)
WRD was started in 1997 by John Gardner. WRD specializes in Engine and Suspension Tuning to give you an unfair advantage in Autocross, Track Days, Road Racing, Drag Racing or just performance street driving. WRD sells only top products at fair prices. Including Unitronic, Coilovers, Stress Bars, Engine Mounts, Big Valve Heads, Race Motors, Conversion Mounts, and a variety of major brands. Feel free to call them with any questions and tap into their 20 Years of VW tuning Experience. Learn more at www.wrdusa.com